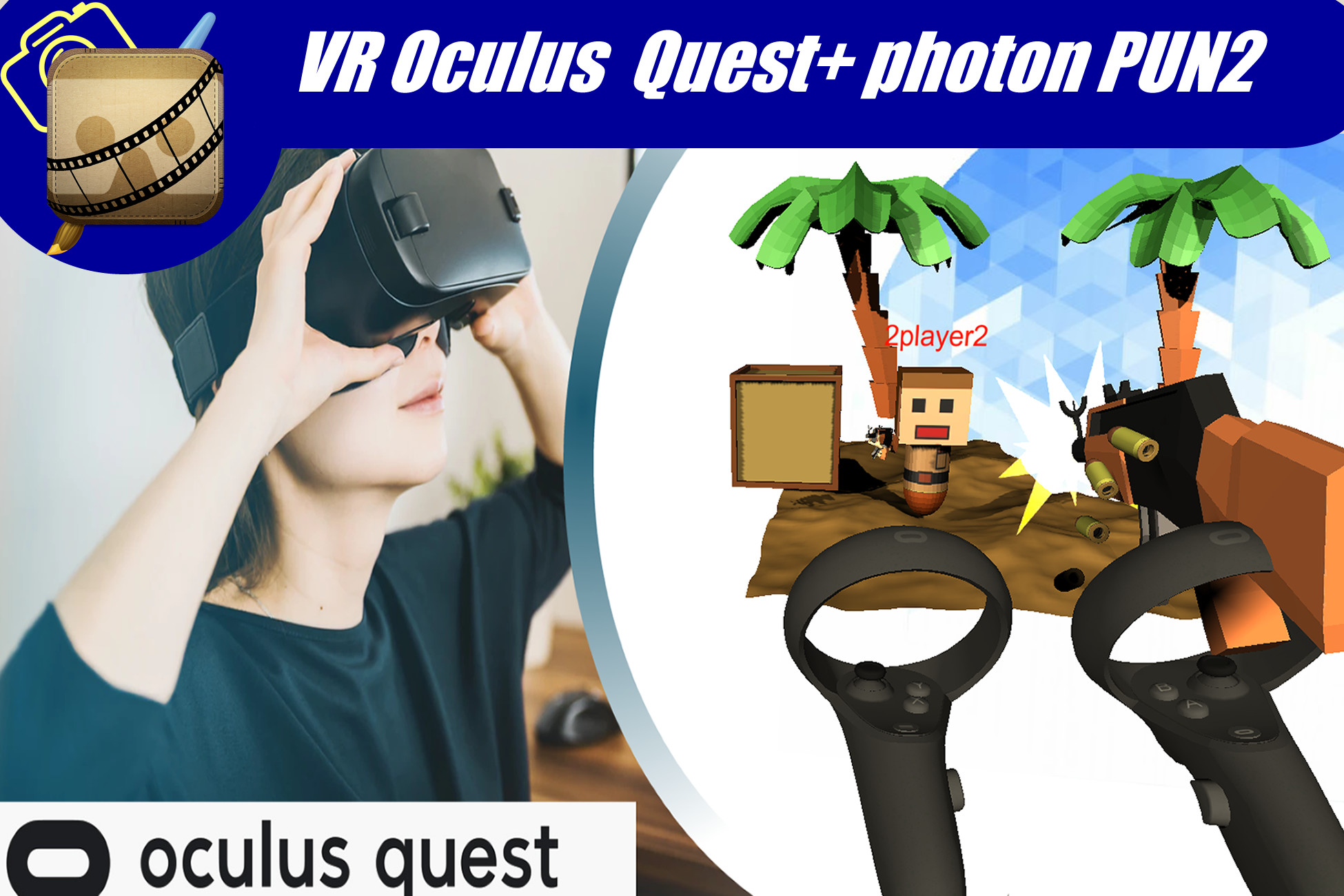 Oculus version v.1.44 This is a VR multiplayer game for Oculus Quest using Photon PUN2 free version. This is a complete package for creating a multiplayer game VR_MFPS (VR multiplayer first person shooter) for Oculus Quest in which Photon PUN2 is used for the server side. The game allows a maximum of 8 players that play in a “Battle Royale”. This means that any player can kill the others and there are no teams in this current version. The players can choose between three different maps (containers, beach and futuristic) that include different models, textures and gameplay. The users can also select their usernames and three different skins for the appearance of the head, weapon and body while playing. The game dynamics work as follow: First, a popup menu is shown and the player can select his username (it is also auto-generated) and connect/disconnect from the server. In this same menu the payer can choose between three different maps (rooms). He can also select the skins of the head, gun and body of the character. Once the player logs into a room, a different sub-scene is created, in which the player has to survive against the other enemies. Movement of the weapon and shooting is achieved with the Oculus quest joysticks. Aiming is affected by the movement of the player. Reloading and changing from primary weapon to secondary weapon is also implemented. When a player gets to a specific score, the game ends and shows a message for all players (winning player is shown), which are disconnected from the room. Scores are tracked and stored in a scoreboard available in the scene. This package includes: 1. Scripts that control the Photon server calls.    a. Player creation.    b. Lobby and Room management.    c. Player connection/disconnection.    d. Setting custom Photon properties for scoring. 2. Integration with oculus rift for VR game. 3. Scripts that control the map selection. 4. Scripts that control the skin selection for the head, body and weapon. 5. Player movement, shooting and health. 6. Script that control the camera movement. 7. Scripts to change/shooting weapons. 8. Prefabs that can be customizable to change the avatars of characters. a. Unique avatar sent across the photon server. 9. Three different environments that are easily customizable. 10. Raycasting from player oculus right joystick using a laser effect. 11. All the textures, prefabs, gameobjects, materials shown in the video. 12. Almost one comment per 5 lines of code. This package needs the following FREE packages from Unity. Photon PUN2 Oculus integration V.12 From cardboard buddies we pretend to give the best customer service, so we are available 24/7 for all doubts, errors in code development and potential modifications.